It is often a good idea to find a well hidden place near the frontlines to power down and abandon the APC, as it can still fulfill its two main roles in that state. With only a single AMS unit and two Machine Guns, it doesn't have enough firepower to fend for itself and is easily be destroyed if caught alone.

Additionally, APC can be left near critical bases in Terrain Control, especially forward spawns. This way, BA can quickly and quietly spawn at the APC, sneak in, and recapture lost bases. 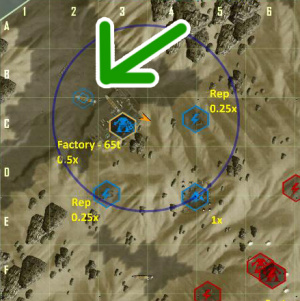 The combination of the AMS and ability to purchase ammunition as a Depot makes this a perfect compliment to any team built around long range missiles or slower Heavies' and Assults' to resupply from.

Each APC can carry up to 6 Battle Armor, though when destroyed with people onboard - each passenger will count as teamkill to the driver, therefore extreme caution is required. When driving the APC, its clunky controls, slow speed and awkward profile make it easy to get stuck on terrain.

Armored Personnel Carriers were used amongst every army since the earliest times. Though weakly armed these vehicles were usually fast, and capable of transporting a great amount of personnel in short time. The APC usage differs from army to army though, in some the APCs are front-line units, in other they serve second-line garrison units. Wheeled APCs carry 2 MGuns, 3 tons of armor and are capable of reaching up to 97 km/h.