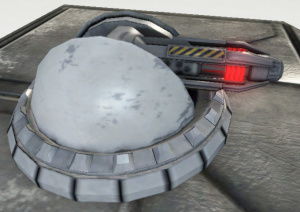 The Laser Anti-Missile System, or LAMS, consists of one or more automated defense turrets that target and shoot down any enemy missiles that come within 500 meters. Utilizing a rapid-fire Pulse Laser, it is capable of destroying most missiles in a single shot, but multiple shots are needed to destroy the much larger and powerful ArrowIV.

It should be noted that the visible laser beam from LAMS isn't where actual damage is delivered. LAMS has nearly 100% accuracy and instant aiming mechanics. It's unrelated to the effect the player can see. The reason for this is the difficulty in properly aligning the visual effects, due to engine limitations.

The visible laser beam can be seen by all players in range, which could potentially give away one's position, so beware. LAMS requires Active Radar to function and is equipped on the units listed below.

LAMS does not generate heat, so pilots don't have to worry about awkward overheat shutdowns due to LAMS shooting down enemy missiles.

Some bases are protected by larger, stationary version of LAMS. These turrets deal much more damage than the standard mobile versions, and are also able to target and shoot down Long Tom shells and bombs. LAMS turrets shoot down both friendly and enemy missiles and artillery shells that come within 300m of the turret, resulting in bad success and sometimes even well-earned friendly damage for base campers.

AMS was added to MWLL in version 0.2.0, though in 0.3.0 it was renamed to its canon designation, the LAMS. Version 0.3.0 also added the LAMS Base Turrets.

Typical BattleTech AMS utlize short-range, rapid-firing Machine Guns; however, what is currently implemented in MWLL is the Laser Anti-Missile System, which uses a compact Pulse Laser - when firing, it could develop relatively large amounts of waste heat, forcing equipped Mechs and Vehicles to manage it well or install additional Heat Sinks. The advantage of LAMS is that it does not require ammunition, making it capable of defending the equipped unit during long battles.

Introduced in 2617 by the Terran Hegemony, the anti-missile system is used to destroy missiles before they strike their target. This is accomplished by using a short ranged rapid firing weapon which shoots at the missiles. Because missiles in BattleTech are usually fired in salvos of up to forty at a time, anti-missile systems are rarely capable of destroying them all. Due to the loss of knowledge caused by the Succession Wars, anti-missile systems ceased to be produced by 2835. Only in 3040 did the Federated Commonwealth rediscover the means to produce this equipment. For the Clans, however, AMS never became LosTech, and by the time of the invasion, the Clans had improved on the Star League version by replacing the solid slugs with flechettes, allowing for more ammunition per ton.

Laser versions of the anti-missile system exist, and benefit from having no ammunition requirement unlike regular systems. However they produce heat as a side effect of their use.