The Powerwalk has little in the way of weapons, sporting less weaponry than most heavy Mechs. What makes the Powerwalk a viable option is that, thanks to MASC, it does what no other Mech is capable of: Getting to the frontlines at nearly the speed of a Clan Heavy and with 26% more armor. Not only does the Powerwalk travel quickly, but it does so quietly as it is equipped with GECM. Careful not to ride the yellow line too closely as an inopportune overheat will broadcast the Powerwalk's location to every enemy. Thanks to the Powerwalk's generous 8 DHS, it can sustain fire with its 3 MPLs with little issue, even on hot maps. The Powerwalk has no long range weapons, so using MASC can be critical to bring its AC20 and two SRM6s to bear. In general, Atlas Mechs tend to draw enemy fire and receive an overlarge threat assessment. The Powerwalk can take advantage of this. Even though the Powerwalk's weapons tend to lend themselves to staring, the beauty of the Powerwalk's weapon distribution allows it to tank and damage spread quite effectively giving allies time to deal out damage. Each arm only carries a single MPL meaning little of the Powerwalk's function or firepower is lost from a destroyed arm. Only the Powerwalk's right torso mounts much firepower (SRM6 and AC20) and any enemy trying to destroy the Powerwalk through a side torso will be disappointed with its slow damage transfer thanks to the Powerwalk's standard engine. As for ammo, the Powerwalk does tend to run out of SRMs during long engagements, since its free ton should be dedicated to AC20 ammo. That said, the Powerwalk's MASC makes repair and rearming substantially easier that with other assault Mechs.

The Atlas Variant E is outfitted with the most sophisticated electronics available. BHP gives it enormous sensor range, an advantage it can share with its comrades due to the C3 Master, while GECM keeps it hidden from detection. Dual LAMS offer itself and nearby allies good protection from missile barrages, and the iNARC enables it to select targets for itself and friendly missile artillery. The armament of 2 ERLLs and 2 LRM15s give it long range firepower similar to most long-range IS heavy Mechs and an ERML adds a little extra firepower at medium ranges. Overall, it cannot expect to defeat Clan heavy and assault Mechs on its own. As the anchor that the team together, single combat is not amongst its abilities. It is supposed to be the leader of a pack, giving them cover, giving them information, giving them protection, and giving them their targets to slay. The Atlas E's 3 tons of extra ammo give it modest staying power, but it is the least Armored Atlas and carries only 4 DHS. Pilots should watch their heat carefully and chain fire their weapons if needed.

Note: This asset has both C3 and GECM, meaning there is no benefit to using passive radar except when covered by allied AECM.

A unique variant, the Atlas F heavily relies on the mechwarrior's ability to use the two heavy hitting Tbolt15 missile launchers as effectively as possible. Their lock on range is 750m but will still do damage to targets out to 1940m away. They do have a rather slow turning radius, thus are quite ineffective against agile targets. Instead, mechwarriors should unleash the pinpoint accuracy of the long range three Large Pulse Lasers against said targets. Furthermore, mastering the ability to dumbfire the Thunderbolt missiles at brawling range is somewhat difficult but oh so rewarding when accomplished successfully. Careful maneuvering is required for the F to get into position, trying to get a down the throat or up the kilt shot that'll maximize the chance of the Tbolts hitting. This is far easier against slower targets while quick mechs can dodge out of the way relatively easily unless at close range. 2 free tons of ammo are insufficient for longer combat engagements. The Atlas F lacks any defensive electronics equipment, so mechwarriors should not be caught out in the open against enemy missile boats or dedicated long range snipers. 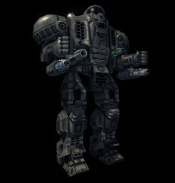