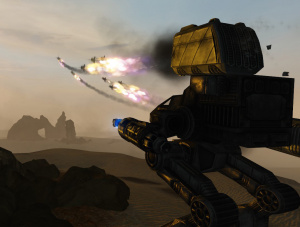 Although individually the missiles from an LRM launcher don't deal much damage, taken as a whole salvo the combined firepower adds up quickly. The weapon's long range and ability to be fired indirectly from safe location (with the aid of NARC or TAG) makes LRMs popular support weapons in MWLL.

Although LRM and CLRM (Clan LRM) are statistically identical, CLRM mounted on mechs are actually direct fire missiles in contrast to vehicular and non-clan LRMs launching-arc behavior. The non-vehicular clan assets with CLRMs are thus more effective for brawling and direct firing at targets, which however, comes at a cost - CLRMs are easier dodged by cover. The IS LRMs on the other side are launched at an angle upward, preventing them to reliably hit any target closer than some 200-300m out, even thou warheads activate after 100m of flight, but allowing them to traverse the battlefield at a higher altitude and more effectively score hits on targets behind considerably high obstacles.

There are three important things to keep in mind about LRM weapons. First is that the missiles only have modest maneuverability and can have difficulty striking fast-moving targets. Second is that, like all missile weapons, if the target is protected by an AMS fewer (or in the case of the smaller launchers, none) of the missiles will manage to reach the target. Finally, because the missiles arc into the air upon launch it can be very difficult to hit targets at shorter range. This makes Long Range Missiles best used against less maneuverable targets and fired off in the largest groupings possible to help saturate any AMS defenses.

The arcing trajectory of LRM launchers (IS and vehicle LRMs) makes them ideal for indirect fire support, with the launching unit protected by a wall or ridge. In order to work, however, the launching unit(s) require the aid of a spotter equipped with either TAG or NARC. With the spotter designating targets the LRM's can be fired in the direction of the target and will attempt to home in on the marked unit. One very important thing to keep in mind is that the LRM launching units must be operating under Active Radar in order for their missiles to track the TAGed or NARCed unit.