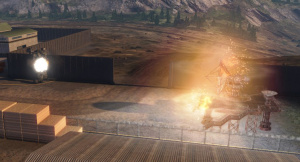 LIGHT AUTOCANNON [Introduced: 3068 (Federated Suns [LAC/2, LAC/5]) After spending nearly a decade in the prototype stages—long enough to actually give rise to the rotary AC—light autocannons (abbreviated as LACs) only hit full-scale production with the unveiling of Yeffters Weapons’ Mydron Flyswatter and Mydron Snakekiller models in 3068. Ironically, what spurred this production was the destruction of the NAIS, where these weapons were first developed. It may be a bit of poetic justice that the first models were rushed to the battlefields of New Avalon to help drive back the Blakists’ first assault against the planet. Since then, however, Imperator Automatic Weaponry has begun producing its own versions for the Free Worlds League and their Robe allies. Built smaller and with shorter ranges, light ACs exist only in the lower calibers (LAC/2 and LAC/5), but benefit from the ability to use the advanced munitions that LB-X, rotary and Ultra ACs cannot. The Clans, who have not seen much use for specialized ammunition and who still possess autocannons superior to even these versions, have shown little interest in duplicating this innovation, though the same cannot be said of the other Inner Sphere states. –EB]

Only standard and light autocannons may make use of specialized ammo beyond LB-X cluster munitions. LB-X cluster munitions may be used only by LB-X AC types, which may also use standard AC ammo (but no other special ammo types). Ultra and rotary ACs may not use specialized ammo. Table Reference: Weapons and Equipment (Inner Sphere and Clan, pp. 341–343) Game Rules: Total Warfare, p. 98