The Hawkmoth is a light VTOL available to the Inner Sphere. Its light armor and high mobility allow it to skirt above and around the battlefield, tackling objectives and finishing off stragglers. The greatest weaknesses of the Hawkmoth is its lackluster damage potential and fragility, both comparable to a light hovertank. Because of the unique flying capabilities of VTOLs, pilots should be looking for targets of opportunity, back-capping and relaying enemy ground troop movements.

A long-range sniper variant. Probably most suitable for typical gunship duty - it can pop-up from behind cover at extreme range, fire a single damaging projectile, then hide before the enemy manages to return fire. When near the front line poking the enemy to distract them is a sound tactic. The greatest problem of this variant is lack of damage potential. While the LtGauss has incredible range, it also has a poor damage profile, meaning that this unit should prey on the wounded and focus fire on units that are retreating from the front-line for repairs while relaying Intel of the opposing units. Housing 16 shots per ton, the Hawkmoth Prime comes with two Free Tons bring the total shot capability to 48. Four MG spray a hail of bullets etching away armor. Equipped with EOptics and BAP aid it in it's search for prey and enemy movement.

The A has a devastating combination of two MRM10 to batter and soften targets, and a complement of Small and Medium Lasers to finish ablated components off. This variant boasts both the highest DPS and burst potential of the Hawkmoth family, but quickly loses steam around beyond 500m, and is useless beyond 650m. The effective VTOL pilot will use this variant to harass the enemy- punish 'mechs that attempt to focus you with a few easily slung salvo of MRM10 before drifting behind cover- and quickly obliterate any 'mech that makes the mistake of ignoring this flying powerhouse. An extra half-ton of armor will grant you a hair more staying power over the other Hawkmoth variants, but not enough to forgo careful flying- at the end of the day even 5 tons of armor will vanish under a heavy mech's sneeze.

The Hawkmoth B is the de facto mid-range Hawkmoth. One of the highest DPS of the Hawkmoth family, 2 Air MXPL and a dizzying 5 HMG plus a single SSRM4 can ablate through any enemy with ease. This profound damage is only recognized by the best pilots, however - as it requires you juggle both holding your aim on target AND flying safely - not just to avoid terrain, but enemy fire. Easier said than done with the painfully short ranged 350m HMG, which mean you need to choose your prey carefully since any commitment needs to be a full commitment - 4.5 tons of armor don't offer much wiggle room for mistakes.

The C variant replaces the standard LGauss with a Air Large Pulse Laser and MGs for a dual Thunderbolt 5 launcher, trading direct-fire capacity for more damage and some limited fire support capabilities. The EOptics extends it's abilty to select targets. Where the Prime has some capacity for Anti-Air capabilities with its easy to aim LtGauss, the C must maintain sustained contact for the Air Larger Pulse Laser to perform there intended task. The Thunderbolt 5 offers considerable screenshake that can make an already well-piloted VTOL even harder to hit.

The Hawkmoth D sports the second-highest burst potential of the Hawkmoth family. The additional 1/2 ton of Armor increases it's survivability . Its dual LPPCs provides a relatively strong mid-range punch the equivalent of a standard PPC as an Alpha hit or Chain-fired to keep your foe off balance. Backed by a pair of Air SRM6 racks with zero min range out to 498 meters. An effective pilot will use this Variant to support in a brawl, Chain-firing its salvo of screen-shaking projectiles to tip any 'mech encounter in your teams favor - or, bobbing and weaving behind terrain and buildings, delivering nasty Alpha Strikes between cover.

This variant of the Hawkmoth's three Air Small Pulse Lasers and two Air Streak Short Range Missiles 6 allowing for a good general-purpose VTOL. Compared to the other variants, it's the middle-ground in terms of both DPS and burst potential. The quick-fire Air Small Pulse Laser offers punishment against enemy aerospace and in conjunction with quickly-reloading Air SSRM6 and two Free Tons, it can focus down components of ground assets with a steady hand. Being equipped with a cool IS engineered Air SPL means that this variant will shine brighter in hot climates where its Donar cousin with a Clan engineered LPL will be overheating.

Effectively a flying Raven Prime, the Hawkmoth F carries the same iNARC 900-meter system plus TAG for painting targets a 1350m for missile attacks. The F also carries BHP which boosts detection range by 400m and improves lock on time, C3 that distributes Radar readings to any teammates in range, and defensive Vtol GECM that increases the time it takes for an enemy to achieve target lock while reducing your signature to 500m. This variant can be used on any map for Intelligence Recon and Targeting - and is a must-have for teams built around long range missiles. The F is primarily a support and intel asset - and only carries three MGs. They can, in a pinch, finish off a low enemy or inattentive battle-armor .. but otherwise won't be able to stand toe-to-toe against anything else on the field.

The Air RAC5 has impressive damage for a VTOL - which can be delivered from 860m out, with a significant punch coming in at 500m with 4 Air ERSL and an Air ML - combined, is a blast with more damage than an LBX10 and can be refired nearly twice as fast. Equipped with EOptics and BAP aid it in it's search for prey and enemy movement. The RAC5 is easiest to land on larger, slower targets, which should be a priority considering that maintaining a bead will severely affect your maneuverability. 3 Free Tons should be topped up at every opportunity to take full advantage of your powerful RAC5 which is likely to chew through multiple tons of ammo per engagement. 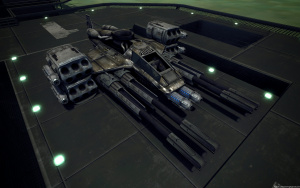 Up until version 0.7.0 there was no Hawkmoth D available ingame, because the name was considered "reserved" for an imaginary asset. The Hawkmoth D was a variant set up by KingLeerUK, one of the MWLL team's Lead Developers. The proposed configuration was 4 Long Tom, 6 Heavy Gauss, 8 RAC20, 1 MG with additional 4 LAMS, GECM, BHP and C3. See original post. The Hawkmoth D quickly became a common in-joke of the forum community, and is sometimes mentioned in discussions about alternate variants and anything regarding "overkill". There are promotional posters near some spawn points, showing Hawkmoth D advertisements.

The Hawkmoth is the lighter cousin of the immensely popular Yellow Jacket VTOL. Another Michaelson Heavy Industries design, the Hawk Moth was designed around the Light Gauss, just as the Yellow Jacket was around the larger Gauss Rifle. Using the weight saved by the smaller weapon, the Hawk Moth can zip along at up to 130kph and also carries enough ammunition for a prolonged engagement at extreme stand-off range. However, it carries very light armor, and stands very little chance of survival when engaging outside the environment for which it was designed.