Difference between revisions of "NARC"

NARC, or Narc Missile Beacon, is a missile homing beacon that guides friendly missiles to the target.

Upon striking the target vehicle, NARC acts as a missile guidance beacon for 25 seconds. While the NARC missile itself does no damage, when successfully "stuck" to a target, the NARC will begin broadcasting; in-range friendly vehicles will receive a notification that a NARC is active, and any friendly guidable missiles will automatically home in on the beacon once they get within 1000 meters of the beacon, provided they were launched with active radar. NARC beacons will also override a TAG laser if both are active at once.

1. NARC beacons can not succesfuly broadcast from units under the protection of an AECM field, and every beacon fired at such a unit will not be able to activate. Already active beacons that come under the influence of a hostile AECM will deactivate and stop broadcasting until they leave the field again or their timer runs out.

2. Any EMP effect from LGBs or PPCs (of all sizes) will remove NARCs, as long as the EMP splash reaches the core of the NARCed unit (Mech center torso, Tank Hull, etc). With this it is possible to remove a NARC from a friendly unit, or from yourself, by firing a PPC to near environment (wall for example) or direcly to component. Just hitting mechs foot won't usually help, because the EMP splash won't reach the CT. 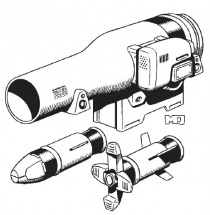