Ballistic Weapons are weapons that fire projectiles, as opposed to Energy or Missiles, and function as the basic "guns" in-game. They have modern-day equivalents, like cannons, shotguns, sniper rifles, and machine guns, making it easier to grasp how they're supposed to be used in-game.

There are two main kinds of Ballistic Weapons. Direct fire and indirect fire.

Indirect ballistic weapons include all of the Long Tom Artillery, the Sniper Artillery, and, to a very slight degree, the various Thumper Artillery.

All other ballistic weapons fall into the direct fire category.

Ballistic weapons differ in their usage depending on their type. Small-caliber auto cannons are good at destroying Battle Armor and damaging Light Mechs. Their high rate of fire along with their extreme range and ammo capacity make them best as harassing and sniping weapons. Higher caliber rounds have much shorter range and longer reload times, making them more suited for destroying slow and heavily armored targets. They are still effective at destroying light mechs and aircraft, but at a much shorter range.

Gauss rifles deliver massive damage to a single pinpoint target, so they excel at destroying components on enemy mechs. They have a slow firing rate and limited ammo, but their ability to deal all their damage with a single accurate projectile makes them perfectly suited for anti-aircraft fire. Gauss rounds have a fast, but not instantaneous travel time, so they must be led against against moving targets. Like auto cannons, light Gauss Rifles have longer range and heavy Gauss Rifles have shorter range. 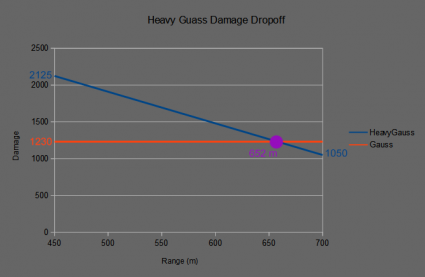 Many ballistic weapons have a damage dropoff, that is to say, they do less damage the farther away the target is. For most weapons this damage dropoff starts at the weapon's maximum range, and just a few meters beyond the stated maximum range, the weapon does no damage. Some weapons, like the RAC2, have a smaller dropoff rate and can damage targets many tens or even over a hundred meters past their normal maximum range.

Many ballistic weapons will overheat or 'jam' when fired continuously (represented in-game as a bar under the weapon name on the weapons display). If the weapon happens to overheat, it will become unusable for a short time (3s-10s depending of the weapon), after which it will be fully cooled or 'unjam' and be usable again. In most cases overheating the weapon is unwanted because the normal cooling rate is a faster way to cool the weapon, exception being Hyper-Assault Gauss Rifles, which are intended (and more effective) to shoot until overheat is reached.

Types of Ballistic Weapons in MWLL