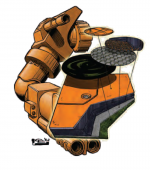 NOTE: "Armor" can also mean a tank, hovercraft, or mobile artillery that has yet to be specifically identified by one's radar.

Armor is the 'health' or 'hitpoints' of each asset, besides BA. When an asset is damaged, armor is destroyed or blown off of whatever section, or hitbox was hit by the weapon. Each asset has a different amount of armor on each of its different parts. Each part, or 'component', has it's own value that is tracked separately from each other. Each component can be singled out for damage by aiming at specific hitboxes that are visible on the asset. For example, by aiming and shooting at the turret of a tank, the tank's turret armor can be damaged. By reducing the armor of a single component to zero, it is usually destroyed. There are typically other consequences associated with this like destroyed weapons, reduced maneuverability, or death. Some hitboxes are large, like the side torsos on a [[[Mauler]]], while other hitboxes are small, like the turret on a Shoden. Hitbox size and location, and whether or not the pilot can quickly move that component out of line of sight, affects how easy it is to damage that particular component. 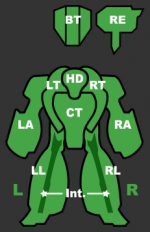 Shooting a destroyed side torso will cause the damage to transfer to the center torso. The amount of damage transferred depends on what engine the 'Mech has; Inner Sphere XLs suffer double damage, Clan XLs take 66% more, Inner Sphere Light Fusion engines receive 50% more, while 'Mechs with Standard (Std.) engines like the Atlas do not suffer any multiplier. Regardless of chassis asymmetry, or mounting... Whether Inner Sphere XL, Clan XL, or Std. Engine.... Shooting through a all of a side torso's armor and spreading into the Center Torso will always take longer to destroy the the Mech than shooting the Center Torso itself, barring the clever utilization of splash damage weapons. While they're a slower route, side torsos can be harder to defend by twisting, and often hold vital weaponry that will become disabled on destruction.

If the rear torso is heavily damaged or destroyed, damage transfers to the center torso with a x3 multiplier and the 'Mech loses half its maximum speed as well as some heat dissipation. This reflects the engine damage that can be dealt and also makes shooting the backs of 'Mechs much more effective.

Destroying a 'Mech's arm or external will permanently destroy that component, unlike a destroyed head, back torso, or side torsos which can be repaired. Arming or externaling a 'Mech can be a good strategy against larger 'Mechs. Sometimes it isn't possible to win in combat against a larger opponent, but causing permanent damage by removing arms or externals can be an effective strategy to make the enemy permanently weaker, often forcing the enemy to sell their 'Mech. 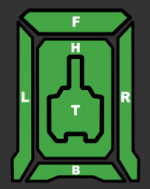 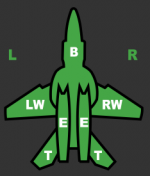 If both the tail and engine are destroyed, the ASF is no longer airworthy, it will lose much of its top speed, won't be able to boost, and will be incapable of taking off again after landing. 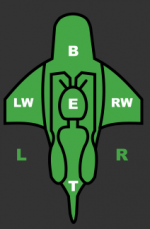