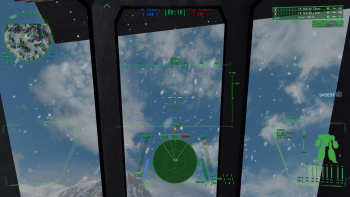 Pitch has two main meanings in MWLL. Both meanings typically involve using the [mouse] Y-axis, up and down. Movement along the mouse's X-axis is called yaw.

As a Maximum/Minimum Tilt

Tanks, Mechs, and other ground vehicles can tilt their turret or torso to a maximum pitch and a minimum pitch. Some tanks and mechs like Huits and Riflemen can look up to a near 90 degree angle. The minimum and maximum tilt can be found on each asset's wiki page under Torso pitch and Turret pitch.

Having a higher maximum pitch allows the asset to better shoot at targets at a higher elevation, especially Aerospace and VTOLs.

Having a lower minimum pitch allows the asset to better shoot at targets at a lower elevation. This is most useful when shooting from a high vantage point and when shooting at BA that are in quite close.

As a Maneuvering Direction

VTOLs and Aerospace both aim and maneuver up and down using pitch. By aiming up with the [mouse] or the [space bar], aircraft can gain elevation, or if the aircraft is rolled perpendicular to the ground, it can instead make a sharp turn.

Aircraft have no maximum pitch or minimum pitch limitations like tanks or mechs.

For additional information on how to use pitch to maneuver an aircraft see the Air Combat Guide.