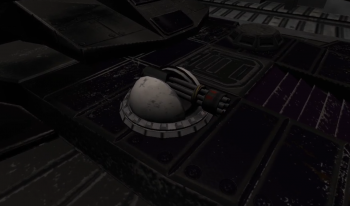 PDS or (Point Defense System) is a mounted turret found on some Vehicles as shown in table below, as an analogue defense system against Battle Armor similar to B-Pod for Mechs.

The PDS turret deters enemy Battle Armor by automatically aiming and firing on them, delivering minor damage and a jarring screen shake.

The Turret has massive 8000 health so concentrating on destroying it is a waste of time and ammo.