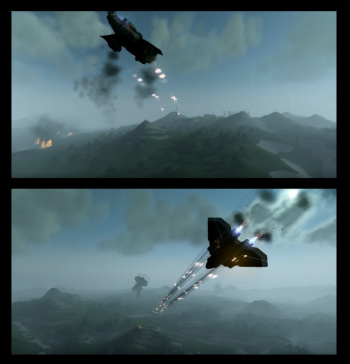 Vertical Take Off and Landing (VTOL) aircraft are some of the cheapest in the game. VTOLs are not starter assets, but can be purchased with a small donation from another player or with at least one increase in rank. VTOLs have a longer build time than ground assets, players will have to patiently wait 25 seconds for their VTOL to be constructed.

VTOLs fly differently from aerospace. Pressing [space] will force the VTOL to take off into the air and gain elevation, while [Left Shift] will cause the VTOL to descend. By flying on a roll with [A] and [D] VTOLs can strafe left and right. [W] and [S] cause the VTOL to fly forward and backward. Forward and backward flight speeds can be increased by pitching down or up, respectively, using the mouse. Using yaw on the mouse, the VTOL can be made to aim at targets. VTOLs have a functional maximum pitch of 30 degrees up and minimum pitch of -45 degrees down, this means targets directly above or below the VTOL cannot be aimed at.

While not as fast as a Solitaire with MASC, VTOLs can easily fly over difficult terrain and travel directly to nearly any base on any Terrain Control map faster more reasonably than any other asset. (Aerospace can sometimes capture a base more quickly than a VTOL, but landing and take off at most bases is impractical for aerospace.)

To land a VTOL, hold down on [left shift] until the VTOL is about 20 meters above the ground, let go of [left shift] in order to reduce speed. Then gently tap [left shift] a few more times until the VTOL touches down. Thanks to this landing method, VTOLs can much more easily repair at forward repair bays than other aircraft, but do be careful as allies are not always gentle and my deliver a fatal kick to the VTOL.

VTOLs are extremely effective in the early game against individual targets. Most early game assets have a difficult time pitching their turret or torso high enough to be able to shoot an aircraft directly above them, this provides VTOLs the ability to escape combat by flying directly over the enemy and then ascending. When dealing with large groups of enemies VTOLs should either wait for their allies or stay at a low elevation so that terrain can be used to block incoming fire.

In Terrain Control, aerospace generally do not help the losing team due to their poor ability to capture points and especially long build time of 45 seconds. Players are advised to reconsider flying aerospace if their team is losing.

Dogfighting, or air-to-air combat, has a few key techniques that are needed to be effective.