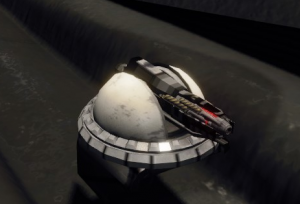 RFL primary purpose is to target and fire upon enemy ASFs and VTOLs that come within range of its beam, 500 meters, thus helping to free up the pilot of distraction while performing a bombing run or engaged in aerial combat. By their nature bombers are heaver, slower and less maneuverable in a dogfight when compared to all other aircraft.