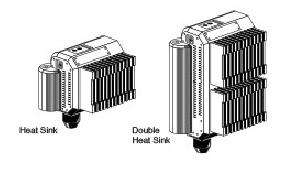 Heat Sinks, or HS's, dissipate the heat generated by JJs, movement, and weapons. The more Heat Sinks an asset has, the faster it cools. Having more Heat Sinks does not increase maximum heat capacity, it only improves cooling rate.

Heat Sinks work more quickly when in water, when Powered Down, when using coolant, and when the Heat Sinks are at full health. Heat sink damage occurs when overheating over the yellow line.