Since MWLL is built off of the original Crysis engine, intense in-game teamfights may occasionally slow your FPS on a low to mid range computer as it doesn't take advantage of using multiple CPU cores. However, with the gamut of customization options available, it's no difficult task getting your game running just the way you want.
Here we go over some of the options available to you in meeting your performance needs. There are plenty of stories circulating the community about how users managed to get surprising FPS on hardware old enough to be your grandpa. If you're willing to make compromises to visual effects, you'd be hard pressed to find a machine that won't play at 60+ frames on minimum settings.

It is advised that on your first launch, that you reduce the in-game sound somewhat and bring it up to a comfortable level afterwards as the defaults may be too high. Performance wise, there is functionally no gains to be made by playing with settings in the Sound menu.

It is strongly suggested that you do NOT change the settings in OPTIONS / SYSTEM SETTINGS / GRAPHICS / ADVANCED from their defaults. MWLL ships with pre-configured optimal medium settings that have combined performance and visual tweaks to give you more FPS in intense graphics heavy battles. Do use the "Autodetect - Optimal Settings" as they will remove the optimizations until the next restart.

The Crysis engine that MWLL is built on requires a CPU that has high single thread performance to deliver high FPS. Recent AMD Ryzen 3000/5000 and Intel CPUs Haswell and later series with 3 GHz base clock or faster are recommended while the best performance will be achieved on a Ryzen 5800 X3D, Ryzen 7000 series or Intel 13600+ series.

The quickest way to reclaim FPS on older hardware or if your machine lacks a discrete graphics card are: 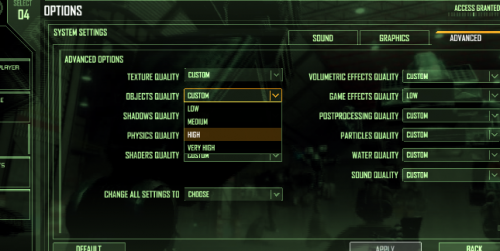 We strongly recommend that you don't alter these settings as they will possibly disable the MWLL pre-configured optimizations. If absolutely needed, reducing the following settings might increase your FPS.

For higher FPS while keeping the MWLL optimizations, we highly recommend to utilize the user.cfg - specifically, the "Best performance optimized preset - Updated April 2022" preset mentioned below.

User.cfg is a file that provides configuration instructions to the game on how to run, such as the resolution of the game window, properties of various game graphical and performance settings. Many tweaks can be made to this file to either cut out unnecessary features for extra performance, or to unlock the best visuals possible within Cryengine 2.

It is placed in the C:\Users\[username]\Documents\My Games\Crysis Wars\MWLL\Client directory. (Replace username and/or drive name with your current Windows username / Windows installation drive.)

NOTE: We highly recommend disabling Crysis's in-game anti-aliasing (set to 0x/disabled) in the graphics settings unless you have a powerful GPU as it can be quite a FPS drain. Instead, use Crysis's FPS friendly edge anti-aliasing which is enabled by default in the first 2 user configs listed below.

The following user.cfg files are hosted on Discord - consider joining the MWLL community to meet up with other MWLL players and ask for help with user.cfg config files https://discord.me/mwll . For more information on how to install, customize, or write your own User.cfg file, see the page on Console Variables.

Here's some slightly older screenshots showing the differences between the configs and how they compare to the stock Crysis settings: Screenshots Comparison

The following user.cfg files are out of date and have a bunch of bugs that causes some settings to be set to the highest possible setting (ie sys_spec_Shadows = 0 sets *all* shadows to the max and killing performance). Only use them if you are willing to edit the file yourself to fix the bugs and change/experiment with the necessary config settings at your discretion to meet your preferences.

There are multiple bugs in the following user.cfgs! DO NOT USE THEM WITHOUT CAREFULLY ANALYZING THEM! At the minimum, change the following:

Besides that, the following are a few more options that can increase stability and performance, but have to be approached with a trial-and-error mindset, considering each player's mix and match of these settings may not work for another player's system.

These, and a few more steps can be found in the Troubleshooting Guide