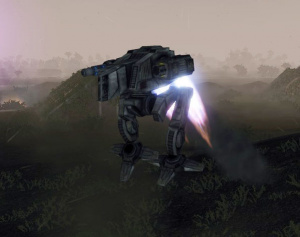 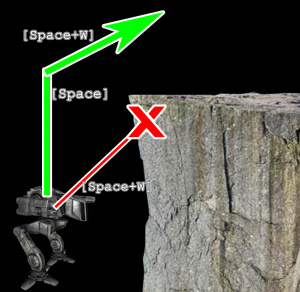 By pressing [w] for forward, [s] for backward, [a] for left, and [d] for right, or by tilting the 'mech's torso by pitching up to go backwards and pitching down to go forwards, 'mechs can control the direction or "vector" of their jump (see adjacent Shadow Cat diagram). Standard jump jets have little to no ability to utilize right and left movement and only moderate control of forward and backward. For better control, some 'mechs have Improved Jump Jets.

Fluttering (pressing [Space] intermittently) can be used to maintain elevation during a jump to help with lock on weapons and help weapons with quick reload times take additional shots. Fluttering can also help prevent tripping and bouncing when jumping over a cliff edge, to do so, press [Space] long enough to clear the cliff edge, then press [Space+W] to vector forward onto the cliff.

Improved Jump Jets (iJJ) are heavier than standard JJs and lose some of their vertical thrust for better vectoring (Using [WASD]), horizontal acceleration, and much better control over fuel consumption. Particularly advantageous is the ability to vector sideways rather than only forwards and backwards. This greatly increases a mech's evasive capabilities, like jumping to cover or dodging missiles. Improved Jump Jets, which take up twice the mass and space of standard jump jets, but produce less heat and allow for more nozzles to be fitted for a given engine allowing for a longer maximum jump distance.

Jump Jets are a key Battle Armor defense and method of locomotion. Jump Jets accelerate Battle Armors faster and further than 'Mechs and are substantially faster than sprinting with [shift]. This agility can make a skilled Battle Armour more difficult to hit, although it does reveal their position with a small plume of smoke. 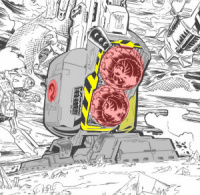