Difference between revisions of "Chimera"

The Chimera is an agile medium mech with a generous 260° Torso yaw and can pack a punch. Care should be taken when using this asset, as it mounts a rocket launcher on the right shoulder causing slightly obscured vision.

The Chimera Prime is a medium range skirmisher. It's biggest gun is its torso mounted MRM20, accompanied by a single ERLL reaching out to 800m and a pair of ERML that come into play at 600m, roughly the edge of its missile launcher's sweet spot. Jump Jets allow the Prime to pop out of cover and unleash an alpha strike, preferably against larger, slower targets that are more likely to take the MRM launcher's full salvo, while its three DHS can somewhat handle the cooling keeping an eye on one's heat is advised, as all of the variant's weapons generate a good deal of heat. Dual Machine Guns provides some extra defence against Battle Armor and scoring extra points. With one extra ton for MRM ammo, pilots should keep an eye on their reserves, as running dry means that its firepower will be significantly gimped.

The Chimera A is a pretty straightforward long range fire support unit. The A's LRM15 is capable of some indirect fire and comprises the majority of its DPS. This is fed by a two free tons of ammo and backed up with direct fire in the form of a single ERPPC. The ERPPC is capable of deactivating enemy NARC beacons, but liable to accidentally doing the same to friendly ones, condemning the variant to working at reduced capacity against NARCed targets, or splitting its fire among multiple targets. Backing those up with 600m with a pair of ERML, means the unit is somewhat capable to take a fight up close, although with significantly reduced capacity. Note that overtaxing the energy based weapons will put a strain on its DHS pair that is barely adequate to manage the heat generated.

This unit is the sole embodiment of that principle. While short ranged and of limited staying power when pitted against opponents above it's weight class, this marvel excels in bullying targets under it's weight class in close quarter combat - the stray Battle Armors that are left or just spawned to defend a base or choke point.
Not only bullying, but actually shutting down smaller units and stripping them of many of their inherent advantages: dumbfiring the almighty DSSRM6 provides a wide area of splash damage, each of the LPPC jolts will instantly suppress the BA's targeting systems even if by the mere splash, if not outright finish it off on a lucky hit. The Improved Jump Jets will augment it's mobility to rival if not surpass that of an Longinus Battle armor.
The quad Machine guns array will keep the BAs regeneration functions in lock down while whittling it's armor even further down, even for a tiny bit.
The units foremost flaw is the DSSRM6 launchers hunger for ammo - after vomiting out only six (6!) volleys it will run dry and depend on the spare reload - be it bought or not.

A mid range skirmisher similar to the Prime, the Chimera C emphasizes the MRM to the max for even more increased damage potential. Upgrading Primes' MRM launcher to a 30 and swapping its hitscan Large Laser for a splash capable PPC, the C packs a more substantial punch at medium range, but increases the pilot's need to lead their aim and gives them a harder time against agile targets. The MRM launchers quirks and bulky fire power are best tapped into by adopting the combat routine to it - make sure to save his volleys for the least likely to move targets and moments, while softening the opponent, every so often, with the surgically accurate four SL, or awarding it a electrifying PPC bolt for every wrong turn, ill avoided still stand or any other tiny mistake. Sooner or later every warrior makes a wrong turn into a wall or get's "zero throttled" just to receive the ponderous MRM30 volley to the face.
A single DHS necessitates avoiding prolonged engagements. One free ton for its missile launcher is just enough to see you thru the regular enemy wave - but not two.
Features a omnidirectional firing B-Pod should enemy Battle Armor get too close.

Designed by committee in a multi-week process between many developers, the Chimera D is one of the best early game medium mechs. Eschewing the traditional "missiles first" paradigm the Chimera chassis is built on, the lions share of this variants damage revolves around the startling array of 4 Medium Lasers. The TBolt10 still plays a major role, effective at softening and finishing off targets at range, and battering closer mech's with severe screenshake. The dual Flamers acts to further ablate any enemy who makes the mistake of closing on this chimera, and can even pop feisty Battle Armor without affecting your limited heat capacity. The 4 DHS will struggle to handle continuous alphas, the wise mechwarrior will keep a careful eye on their heat gauge and be ready to flush Coolant in tight situations. An extra half ton of Armor helps this variant survive the sub-500m encounters it's designed for, and careful attention to your BAP equipped radar will help you avoid sticky situations before they arise.

The third higest priced Chimera, Armed with 2x LBX5 aided by EOptics and JumpJets it can used as a long ranged sniper variant. When you feel the need to get close, 2 Medium Pluse Lasers can unlease a flurry of concentrated hurt at 34.1 shots a minute and are great for disposing Battle Armor or finishing off wounded opponents. The final blow for rocking your opponent comes from SRM4 missles widing the hole made with your 2 MPLs. Don't forget the 2 Heavy Machine Guns for wacking off armor. With all of it's power and armor the "E" is still better used with a comrade.

Competing for the least expensive variant, this Chimera is a close to medium range jump sniper a.k.a. poptart, combining mid and close range weapons. Within 600m the F dishes out with an explosive round firing AC10 and a pair of always reliable ERML, giving it the ability to harass opponents while looking for an most opportune moment to enter into close combat. At close range a pair of ERSL strengthens its pinpoint strike, quickly followed by the mighty DSRM4 launcher, providing a one-two punch of explosive weapons with screen shake and splash damage. Two free tons for ammo is usually more than sufficient for the ammo-hungry missile launcher.
The unit, having no additional heatsinks, mandates utmost care in picking the right engagements as leaning heavy on both the weapons and the standard jump jets usually won't be an option.
In the moments all else fails, remember to fire the BPod at the enemy battlearmor (or any other weakened opponent for that matter) that is messing around your feet, it might just save your day.

This variant specializes as a fire support platform, built to magnify your teams abilities instead of skirmish, brawl, or fly solo. The Improved NARC beacon launcher requires a skillful pilot to safely land a hit; maneuvering this lightly armored 86kph chassis under 800m is no easy feat- but will be rewarded with 25 seconds of free missile locks for your whole team, and your own LRM20. Two pairs of ERML and ERSL offer some backup damage in a pinch, but are no means enough to fend off an aggressive brawling mech alone. This Chimera flounders without teamwork and coordination, but with it- is a devastatingly effective actor in orchestrating a win through missile oppression. 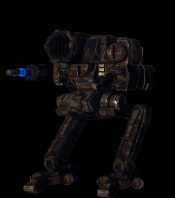 The Chimera is a 'Mech introduced with the Final Beta 0.7.0 release. There had been rumors about it floating around in the forum for a long time, but it was never confirmed until the release of alpha footage of it during the MWLL Media Release: Alpha Tester Shenanigans Video

In 0.11.0 chimera got improved by replacing its old engine with a weaker one, which, in turn, decreased its top speed from 97 to 86. Saved weight allows it to carry more weapons and armor, which makes it more boring to traverse the battlefield, but more dangerous of an opponent, once it finally gets there.

Similar to the earlier Gunslinger, the Chimera was designed in the spirit of cooperation between the Combine and the Davion Federated Commonwealth in the lead-up to Operations Bulldog and Serpent. The Chimera is built on a Chameleon Light Endo 2 Endo Steel chassis that carries a GM 240 XL engine which provides the 'Mech with a top speed of 97.2 km/h. The Chimera's mobility is enhanced by six Rawling 40 jump jets that allow the 'Mech to jump up to one hundred and eighty meters. The Chimera is protected by seven tons of StarGuard CCM armor.