Difference between revisions of "C3"

C3 is a highly advanced computer system that distributes Radar readings to any teammates in range.

C3 takes the user's radar and sensor information and distributes it to friendly units, augmenting and extending their radar. C3 is most often found on heavily specialized Light Mechs, like the Raven or Owens, but can be found on variants of a number of other units. In order to share information, units must operate in Active Radar Mode. This makes them a target while on the battlefield but they are rewarded with additional C-Bills as they wade through enemy infested territory, transmitting vital information back to their teammates. Stay alert and be aware of your surroundings.

The range of C3 scales with that of its carrying unit's radar. So if a unit with standard radar is using C3, all friendly units within 1000m of that unit would be able to see its radar contacts and targeting information. Likewise, if the C3 unit were equipped with BAP or BHP, then friendly units within 1200m and 1400m, respectively, would be able to see that unit's radar contacts and targeting information. 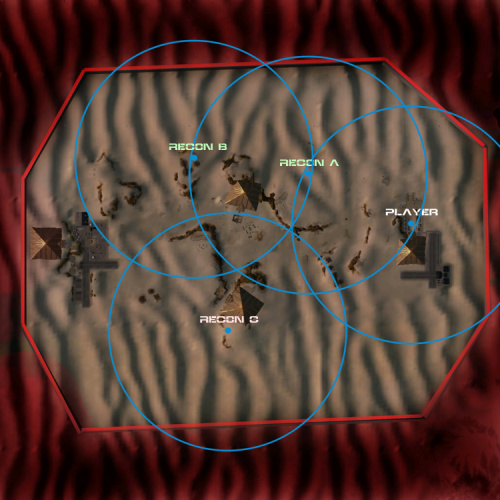 C3 data can be passed from one C3 unit to another C3 and then to regular (process called "chaining"). In this example all mechs have standard radar - it's range (1000meters) is marked blue - and a C3 unit.

The Player can see the radar data of both Recon A and Recon B thanks to the chaining method. However, Recon C doesn't share data with any unit, as it must have a friendly unit within 1000m, and not merely overlap part of a friendly unit's radar.

C3 was introduced in Beta 0.1.0, and at the time was available only on certain variants of the Raven and Cougar. With the release of Beta 0.2.0, additional light mechs got C3 units, as well as each C3 could now chain itself with another within range.

In the 0.4.0 release, the C3 was improved to show friendly units enemy NARC beacons. At some point before the release of Beta 0.7.1, C3 had been changed from having a static 1000m sharing range to scaling with its asset's radar range.

With the Community Edition 0.8.1 release, the C3 CBill reward was reduced by fifty percent.

Though C3 technically uses a master/slave network in which all units must equip C3 to share Radar, MWLL simplifies the process for gameplay's sake. Game C3 units are actually closer to BattleTech C3i - Improved C3 units being combined Slave and Master, but without the Target Acquisition capability like the regular C3 Master/Slave set got.

The following variants equip with C3: