Armor is the material on the chassis of 'Mechs, Vehicles, Aerospace, and VTOLs that provides protection from enemy weapons fire. 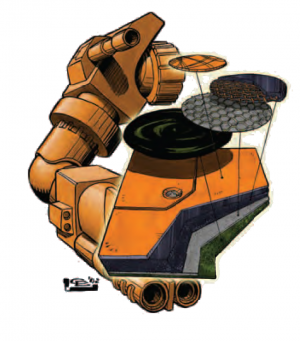 Cut Away View of Armor

Shooting a destroyed side torso will cause the damage to transfer to the centre torso. The amount of damage transferred depends on what engine the 'Mech has; Inner Sphere XLs suffer double damage, Clan XLs take 66% more, while 'Mechs with standard engines like the Atlas do not take any extra damage.

For all vehicles, their turrets are typically much more armored than the chassis itself. This provides an incentive to attack vehicles through their sides as opposed to focusing on their turret, which can be hit from any angle. When a vehicle loses a side, it will suffer loss of mobility or turn rate, depending on which area is lost. If the turret is destroyed, its traverse rate is severely degraded but the vehicle will not lose any weapons.

Losing a wing causes weapon loss and a slight manuverability reduction -- the ASF is still airworthy with a destroyed wing, although it becomes much more vulnerable to being killed, as shots to a destroyed wing transfers damage to the body at a 3.0x rate, making it a viable tactic for defeating ASFs provided you can consistently hit the same wing.