The Actionmapper tool is an interim solution to being able to modify the keyboard, mouse, and joystick bindings for all controls needed for Mechwarrior Living Legends (MWLL).

Things to know before you begin 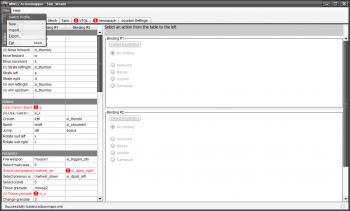 There are two methods for launching the Actionmapper:

How does it work?

The first time you open the Actionmapper it will name your default actionmaps file as "original". From here it is recommended that you start a new actionmaps by pressing the New Actionmaps button found at the top left of the window, after which you will be prompted to give it a name. Try naming it something short but descriptive, like "joystick" or "mouse+keyboard" so they can be easily identified if you wish to try out other configurations later.

One of the first things you may notice, even with a new or default actionmaps, is the presence of conflicts indicated by red colored text and an icon with a red circle and an exclamation mark. Some of these conflicts may be ok or may not be applicable, for instance if you do not plan to use a gamepad. To find out which action is being conflicted with, select the action by left clicking on it. You may clear a conflict either by setting to No binding or to another key/button that is not in use already. 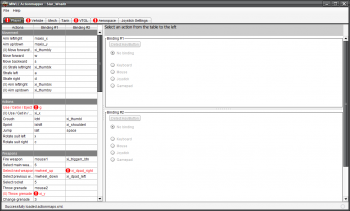 Conflicts are shown in red

Each action may have up to two bindings associated with it. Some actions are analog only, meaning only a mouse or joystick axis may be assigned and must be manually selected. Most actions are digital only, meaning only a key or button may be assigned. After making a selection, any action that has been modified will be indicated by blue colored text and an icon with a blue square and an uppercase M.

Most digital keys/buttons can be detected automatically by clicking on Detect Key/Button and then pressing the desired key/button when the dialog appears. If the key or button is not detected and the device is properly plugged in to your computer, you may need to resort to manually selecting the key/button since the java detection libraries are not able to pick up on 100% of all possible input.

As of 0.8.6, the Joystick Settings tab is no longer relevant as all joystick functionality must be routed through an XBox 360 emulator such as X360CE found in the Joystick Setup guide.

When all desired changes have been made, be sure to save your modifications. The Save function is available from the File menu. After saving all actions marked as modified will be unmarked.

When managing more than one actionmaps in a profile it is necessary for one of them to be active, indicating that it will be loaded the next time MWLL is run. Use the "Set active" link at the top middle of the window for making the currently selected actionmap active.

Q: Why isn't my joystick or keyboard button press being detected when I use the Detect function?
A: Assuming its plugged in and recognized by Windows, its very likely the detection library doesn't recognise it. However, the button may still work in game, you will just need to manually select it using the appropriate pull-down menu for the action. See the Joystick Setup guide for more info.

Q: Why can't I assign Control/Alt/Shift plus a keystroke for an action, such as Control + O?
A: Crysis Wars does not have keystroke modifier support built-in, so MWLL cannot support it yet.

There are certain tweaks that can be done by directly editing the actionmaps.xml which is located in C:\Users\Username\Documents\My Games\Crysis Wars\Profiles\Profilename (explain structure of the actionmaps.xml)